How to disable SASS in Omega 4?

I tried to set up SASS as part of an Omega 4 theme on a VPS server, but I'm now drowning in Ruby permissions and versioning issues. It's causing far more sysadmin type work than a CSS generator is worth for this project.

The Omega 4 docs repeatedly state that SASS is helpful but not essential to Omega 4 and that you can simply write CSS the old-fashioned way, which is what I intend to do - but they don't say anything about how to stop Omega trying (and failing) to apply SASS all the time.

How can I completely disable the SASS element of Omega 4?

I can't find anything relevant in the theme settings. I've tried simply removing / renaming the sass folder in my subtheme and clearing caches, but I'm still getting Ruby / SASS related errors that look like this:

Error: File to import not found or unreadable: singularitygs.

I want it to completely stop trying to do anything related to SASS.

From reading around, it sounds like it's common to have a Drupal production server run Omega 4 with no SASS, and for people to have SASS on their development server then upload the CSS output to production when they're happy with it. Sounds sensible. But how what I can't find is, how do they stop the production server from trying to run SASS and access all that Ruby stuff all the time?

But how what I can't find is, how do they stop the production server from trying to run SASS and access all that Ruby stuff all the time?

There seems to be a major misunderstanding here.

Compilation of SASS is invoked by you, it's not an automatic action that a server will just take upon itself to perform. Your remote VPS will not be set up to try to auto-compile SASS into CSS unless you, or someone else with access to the server, has set it up like that. The very fact that you've had to setup and install ruby on the remote serve should hopefully make that obvious.

Having that stuff on your production server is wrong anyway, you should prepare your distribution locally (read: compile SASS, minify/uglify js, etc), and sync that. That way you can never have any problems.

Your comment below the question is correct: if you don't want to compile SASS, then simply don't run bundle exec guard, compass compile, or whatever other method you're using to instigate the compilation.

If you haven't told any process to watch/compile your SASS files, then no process will be able to do so. The power is yours.

If you've used drush omega-guard, it's not so simple.

In the end, two Drupal.SE and two StackOverflow questions later, the only way I could get Omega 4 to behave and stop freaking out trying to run Ruby every time I touched any directories was brute force, deleting every ruby-related file in the subtheme directory.

I think deleting the guardfile is enough, but am not sure.

I don't know which file was the one that finally fixed it, but the only non-directory remaining files after my purge were: 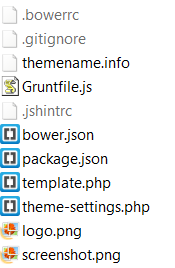 After lots of research and two SO questions I think that the omega drush command makes these changes by accessing the inotify Linux kernel library from the PHP command line which can only be turned off by writing your own PHP CGI script to access the same api. Either that or it modifies .bashrc. If you're a themer whose skillset doesn't stretch that far into sysadmin territory, I'd advise against using the drush commands bundled with Omega 4 - at least until someone writes a drush omega-unguard script.

1
Why is my server complaining that Ruby isn't installed when browsing Omega theme directories? (& how to stop it)

0
Negative margins in Omega content zone
1
How can I center a logo image in an Omega theme?
0
Guard/LiveReload/Sass/Compass CSS Caching Issue
0
Disable compass in Zen subtheme
1
Drush command 'omega-wizard' could not be found
0
How to create Omega 4 subtheme with new “default” libSass based starterkit?
2
Omega 4 php warnings with node_modules folder with gulp install
0
SASS for module CSS?