Which module can I use to visualize Drupal log data in the format of a chart?

I installed Better Statistics and Syslog Access. I wonder if there is a module that can take this data and visualize it like a graph, pie chart, etc? I found one but it's a service, any suggestions?

Have a look at the Comparison of Charting modules. Here is a quote from it:

There are a variety of modules that facilitate the creation of charts. When it comes to charting in Drupal, the saying "There's a module for it" doesn't really apply. In this case, it's more accurate to say, "There are plenty of modules for it" ...

These modules support for various charting libraries that may be desirable based on a site's desired appearance, feature-set, and licensing needs.

Here is the shortlist of 'native' charting modules, for which at least 1 official release exist (quote from that comparison also):

Note: there are quite a few additional 'native' charting modules, though they do not have an official release (yet), only dev, alfa or beta versions.

Have a look at my answer to "Views Table with Taxonomy Terms for Columns and Rows", which details how I once created a crosstab report (using the Forena module) that looked like so: 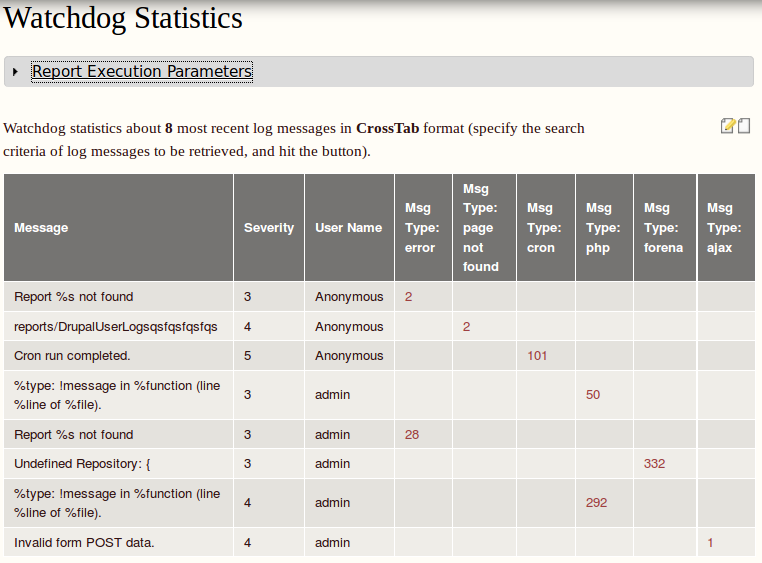 Then look at the video demo "How to create Crosstab Tables and (related) charts" to get an idea what it takes to create a chart from such crosstab tables.

Disclosure: I'm the author of the comparison and co-maintainer of the Charts, Chart and Forena.

Not the answer you're looking for? Browse other questions tagged 7 nodes charts or ask your own question.

1
Views Table with Taxonomy Terms for Columns and Rows

7
Which graphs solution for Drupal 7 can be used to upgrade my Open Flash Chart solution from Drupal 6?
4
How to specify Google Chart API options for altering generated charts when using the views integration?
3
How to access a variable in the ready event within charts_google.js without hacking the chart module?
2
How to combine 3 line charts in a single chart, using the Views integration of the Charts module?
2
How to create a chart from simple data without using the Views aggregation feature?
2
Is it possible to use the Forena module in conjunction with the Flot module?
1
How do I assign different colors to each serie of a Google bar chart